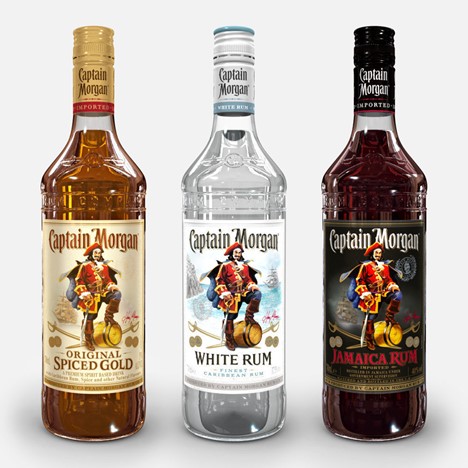 Probably the most popular brand of spiced rum worldwide, Captain Morgan is a rum brand owned by British alcohol producer Diageo out of Canada. The brand was founded in 1944 with its Captain Morgan Original Spiced Rum. Thanks to its classic flavor and low cost, it has become the most-sold spiced rum in restaurants and bars.

Interestingly, Captain Morgan is named and branded after a real pirate (well, a privateer, which is really similar to a pirate) from the 1600’s: Henry Morgan. This swashbuckler lived from 1635 to 1688 and looked a lot like the man on the infamous rum bottles, though not quite as cartoonish. He’s known for privateering around the Caribbean until he helped invade Jamaica on behalf of the British and later became the Lieutenant Governor of Jamaica.

The formula for Captain Morgan Original Spiced Rum was purchased from a Jamaican pharmaceutical company, The Levy Brothers, in 1944 by Seagram’s. Captain Morgan still uses this original recipe of cane sugar molasses, cinnamon, ginger, and cloves, and the dark style is achieved through its continuous distillation process. Part of the recognizable flavor profile of Captain Morgan is owed to its addition of sugar after distillation. Production began in Jamaica, moved to Puerto Rico, and eventually landed in the US Virgin Islands where it’s manufactured today.

Where to Buy Captain Morgan Rum

Captain Morgan, luckily for its swarm of fans, is one of the most widely available brands of rum ever. Most of their many flavors of rum can be found worldwide in every liquor store and grocery store (where liquor can be sold in markets). It can be routinely found at Costco, Walmart, Kroger, and ABC store, as well as online retailers like TotalWine.com, Drizly.com, and WoodenCork.com.

Captain Morgan is famous first and foremost for its signature Original Spiced Rum. This is produced from a continuous distillation process incorporating cane sugar molasses, yeast, spices, and the addition of a few added flavors and sugars before bottling. In its spiced line are also a spiced silver rum (lighter bodied and fewer calories) and its 100 proof spiced rum (similar flavor profile to Captain Morgan Original Spiced Rum, but with more alcohol and a stronger flavor).

Once Captain Morgan Original Spiced Rum became a worldwide hit, Captain Morgan branched out into other styles including a white rum that’s distilled five times to produce a crystal clear, smooth rum. This one isn’t spiced and has that pure cane sugar liquor flavor that white rum drinkers appreciate.

Captain Morgan Rum produces a black spiced rum, a heavier-bodied version of the Original, and a smaller-batch rum called Captain Morgan Private Stock Spiced Rum. These rums are both dark and full bodied and made for sipping on the rocks.

Captain Morgan now incorporates a large line of flavored rums into its product lineup. In addition to its permanent flavors like Vanilla Orange Twist and Spiced Apple, Captain Morgan produces seasonal flavors available in limited editions. These are made with shots in mind, best served shaken straight up in a shot glass. They also make great cocktail liquors for flavored and seasonal drinks.

Captain Morgan incorporates a couple of sipping rums in its lineup, best served on the rocks (think Captain Morgan Black Spiced Rum and Private Stock). Their rums are also excellent mixed into a cocktail or with a single mixer.

Captain Morgan incorporates a couple of sipping rums in its lineup, best served on the rocks (think Captain Morgan Black Spiced Rum and Private Stock). Their rums are also excellent mixed into a cocktail or with a single mixer.

Pour all over ice and garnish with lemon wedge.

Blend all ingredients and chill for one hour in refrigerator

Pour all into empty glass and garnish with an orange twist

Pour all liquids in blender and fill to top of liquid with ice. Blend and pour into glasses. Garnish with a few drops of bitters and a dash of cinnamon powder.

Can you drink Captain Morgan straight?

Captain Morgan’s Private Stock Spiced Rum is the most expensive of the line of products available from Captain Morgan, though it’s still in the affordable range.

Does Captain Morgan rum have sugar and carbs?

Captain Morgan’s biggest bottle in production at the moment is 1.75 liters.

Can you buy Captain Morgan at Costco?

Captain Morgan Original Spiced Rum is available at every Costco where liquor is sold.

Captain Morgan was later sold to the alcohol conglomerate Diageo who owns and produces the rum today. The line of products has expanded from its well-known spiced rum and now includes flavored rums, aged rum, white rum, and ready-to-drink cocktails.

Who was the designer for Captain Morgan Rum?

The brand owes its fame, though, to cartoonist Don Maitz who designed the portrait of Captain Morgan that appears on all Captain Morgan Rum branding. He worked with Seagram’s over a 20 year period while the Captain Morgan character’s iconography spread like wildfire making the rum the second most sold rum brand in the world, and the top selling spiced rum on the planet.