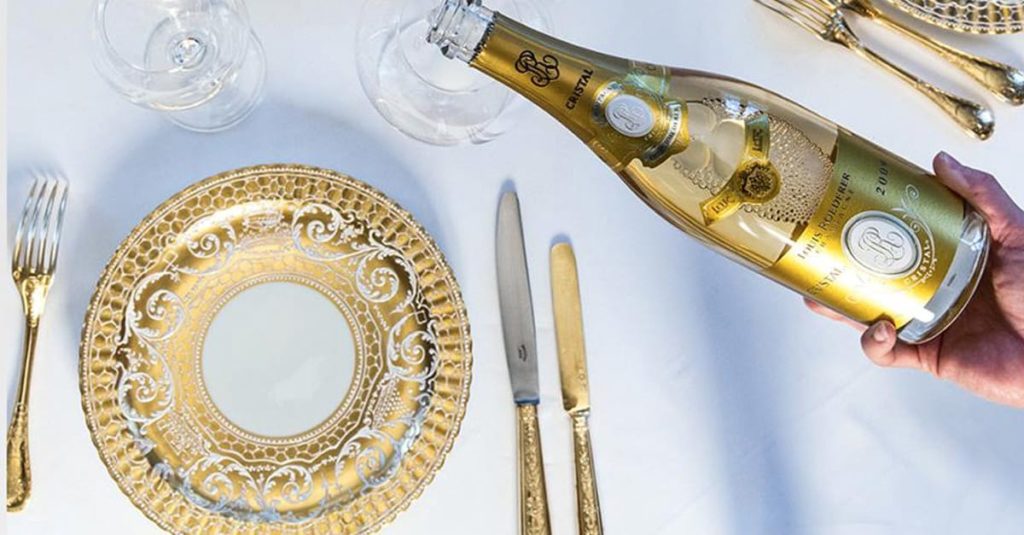 Cristal champagne has become a symbol of luxury, more so due to its association with hip-hop culture. Several artists like Jay-Z, 50-cent, Sean Combs (P Diddy), Drake, and A$AP Rocky referenced the wine in their songs and showcased it as part of their public image.

Some even nicknamed it Crissy, with Tupac creating a cocktail named Thug Passion by combining Cristal and Alizé Gold Passion.

But what warrants all this clout? To understand its popularity, we have to go way back in time.

As champagne gained in popularity in Russia during the mid-1800s, Louis Roederer was one of the top brands and sold a third of production in the country.

Russia was politically unstable at the time, and the Tsar during that period, Alexander II, ordered a clear bottle of champagne with a flat bottom in fear of his assassination. The goal was to see the bubbles and prevent explosives from being hidden under the bottle.

Louis Roederer commissioned the production of clear lead glass bottles (with a flat bottom), which led to the name Cristal (French for crystal).

The Tsar got his first Cristal in 1876, and he asked Louis Roederer to reserve the best champagne for him each year.

Hip-hop culture discovered the brand many decades later and blew its popularity through the roof. However, the hip-hop community boycotted the brand in 2006 after the managing director, Frederic Rouzaud, made comments that seemed racist. Sales kept on soaring, though, so this had no effect.

It is not all about packaging. Quality plays a huge role in the brand’s success because they only produce the wine when pinot noir and chardonnay grapes are perfectly mature.

Cristal champagne contains 60% pinot noir and 40% chardonnay grapes, where the juice ages for six years in cellars, then kept for another eight months after disgorgement. However, these factors vary depending on the type of Cristal champagne.

Why is Cristal expensive?

Cristal champagne is expensive due to its rarity of production and position as a status symbol. You will have to part ways with at least $200 to get a 750ml bottle, but some varieties cost less than $100.

If you are unfamiliar with the terms used in the world of champagne, here is a guide to help you pick the most appropriate bottle for the occasion.

There are four types of Cristal champagnes:

Cristal is the famous and prestigious cuvée first produced in 1876. It has a long history, and the bottles remain unchanged, having crystal clear glass with a flat bottom.

Louis Roederer does not make Cristal champagne every year. Only when grapes grow during the best years do they produce it after harvesting grapes worthy of the prestigious quality.

The House added more varieties of this champagne with time, each with a different twist to the original taste.

Vintage champagnes are those made using grapes that were all grown and harvested in a single year. Since conditions are different each year, the wines might have varying tastes.

These are the opposites of vintage wines because they contain a blend of grapes from two or more years. The practice is common among winemakers as they try to achieve a superior house style consistently.

Houses also classify wines by the year of production, after which they begin aging for consumption several years later.

Cristal champagne and its varieties come packaged in a 750 ml bottle, a standard for most wines.

It is worth mentioning that the prestigious Cristal cuvée adds on a gold wrapping around the bottle, and this is not just for show.First, it shows the champagne is of the highest standard as per the 19th-century color-coding system. Most importantly, the wrapping protects the liquor from UV rays. Since the bottle is clear, the sun can quickly damage the wine.

Champagnes come in seven levels of sweetness. They are:

Brut is the most common type, making up to 90% of champagne sales. On the other hand, doux is very rare, and most of it gets sold in France. Not much goes out as export.

Brut nature champagne is gaining in popularity as a healthy zero-sugar option, signaling changes in consumer tastes, especially with keto-friendly diets. Usually, the sugar gets added after disgorgement to balance out the acidity, so if you do not mind taking acidic champagne, try extra brut or brut nature.

For comparison, extra brut can have 0 – 6 grams of sugar per liter, while doux champagnes have more than 50 grams per liter. That is a lot of calories.

Since doux and demi-sec champagnes have a sweet taste, they pair well with sweet servings like dessert. You can try them with cake, fruit tarts, apple pies, and the like.

However, the less sugary champagnes have high acidity levels, making them perfect for pairing with meaty dishes, oily fish, and seafood. They cut through the rich aromatics of the meat, leaving your mouth full of flavor.

Champagne is best served cold, and the ideal temperature is 47 – 50ºF (8 – 10ºC). If lower than 47ºF, it will be difficult to detect the aromas because the wine will numb your taste buds. On the other hand, if the temperature exceeds 50ºF, the wine will be less bright and appear heavier.

So how do you chill it to the right temperature?

You can keep the bottle at the bottom of your fridge for about four hours or place it in an ice bucket for 30 minutes. Do not chill the bottle in a freezer. When ready, serve the drink in non-chilled glasses. Pre-chilling the glasses makes the champagne lose its sparkle.

Yes. Although due to its rarity, you might not find it all the time, and the pricing might change at any time.

Is Cristal worth the price?

Absolutely. The amount of work put in the cultivation, harvesting (tailor-made viticulture), and production process ensures you get fine quality champagne. Additionally, the company no longer uses pesticides on the vines, so you get the best wine from naturally grown grapes.

What is the best year for Cristal champagne?

2012. It was an unpredictable year with erratic weather patterns, such as very little rain and lots of sunshine. However, even though this led to low yields, it resulted in unusually high levels of grape maturity, which then produced rich, elegant, full-bodied wines that are some of the best Cristal vintages..

If unopened, Cristal champagne can last for years (4 – 10) at room temperature. Once opened, it can stay for 3 – 5 days. After this period, it will lose its bubbles, change color & smell, and taste sour.

How much is a bottle of Cristal in a club?

It depends on the club. High-end establishments will most likely overprice the champagne, so better have a loaded wallet.

What's the most expensive bottle of Cristal?

From the table above, the most expensive bottle is Cristal Rosé Vinothèque, costing over $2,000. However, some limited-edition bottles, such as the 1990 Millennium Cuvee Methuselah, fetch tens of thousands of dollars. Currently, it is not in production. Louis Roederer only made 2,000 bottles to celebrate the millennium, making it more of a collector’s item.

While Cristal is among the best luxury champagnes in the sparkling wine market, there is some competition. The most notable ones are: