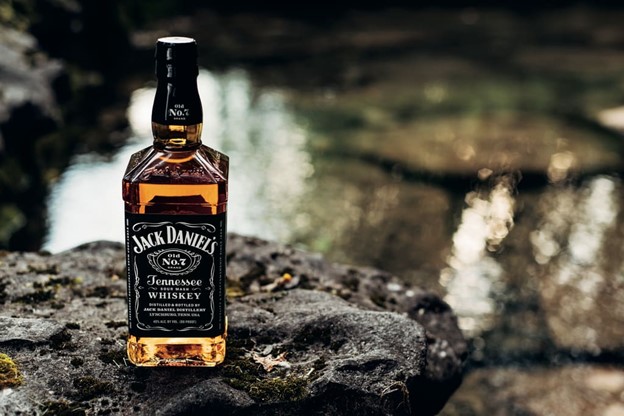 The backbone of whiskey is storytelling. Whether it’s Scotch whiskey, Bourbon whiskey, Tennessee whiskey, or any other style, the drink is centered on telling a story from the story of the whiskey itself all the way through the stories told while socially sipping a whiskey beverage. Jack Daniel’s Tennessee Whiskey is no different, and it has a rich history to tell.

Jack Daniel’s Tennessee Whiskey has secured its place on the world liquor state, a symbol to the world of American rock and roll, and they celebrated their 150th anniversary in 2016 as the nation’s oldest surviving distillery.

Jack Daniel’s No. 7 Tennessee Whiskey is the original recipe, and it has survived over 150 years. The whiskey utilizes the classic Tennessee grain mash, composed of 80% corn, 12% barley, and 8% rye, with limestone spring water from a cave on the original Jack Daniel’s property to create the iconic flavor profile.

After fermenting the grain mash and distilling the liquor, Jack Daniel’s Tennessee Whiskeys are mellowed drop by drop through a hand-produced sugar maple charcoal for a signature mellow flavor. Jack Daniel’s Whiskey is then aged in handmade American white oak barrels, made by Jack Daniel’s themselves, before being bottled and sent around the world for distribution.

Jack Daniel’s is one of the biggest whiskey brands in the world, available everywhere liquor is sold. It can be found in markets like Walmart, Kroger, and Costco, as well as just about every corner liquor store in the world. To order Jack Daniel’s online, visit sites like CaskCartel.com or Drizly.com for same-day delivery from a local liquor store.

There are several styles available from Jack Daniel’s, some of which are staples in the lineup while others are seasonal or limited edition. Here is a summary of currently available products to inform your purchasing decision.

This recipe harkens back to the original recipe made by Jasper Daniel’s in the mid 1800’s when he first became acquainted with distilling whiskey. This style is emblematic of Tennessee style whiskey and has flavors of oak and maple with a smooth, lasting finish.

This double mellowed whiskey is smooth as molasses. Using a similar grain mash to that of No. 7, Gentleman Jack undergoes a second charcoal mellowing for an extra smooth flavor.

Rye is up and coming, threatening to replace Bourbon whiskey as the most popular American whiskey variety. Jack Daniel’s rye uses 70% rye in their grain mash, the liquor mixes a well-known rye whiskey flavor with their signature charcoal mellowing process to produce a smooth, spicy whiskey.

Jack Daniels has a range of flavored whiskeys with a lower alcohol content than their other whiskeys, but imbued with pure flavors and an extra smooth finish. They’re perfect for flavored cocktails and chilled shots.

Each year, Jack Daniel’s puts out a different range of special releases. These are truly top shelf, taken care by the Master Distiller to be unique and truly special. Some are traditional Tennessee whiskeys, some are extra strength, and still others are produced with special mashes or distilling processes. The special releases are for a special occasion and a true connoisseur to appreciate the intricacies in the flavor.

Jack Daniel’s produces a range of non-alcoholic products like pecans, BBQ sauces, and cocktail mixers. These aren’t beverages, but rather additional product selections for fans of Jack Daniel’s.

Pour ingredients over ice and top with soda water. Stir thoroughly with a bar spoon and garnish with a lemon wheel.

Pour chilled ingredients into a champagne glass and serve cold.

Pour all ingredients, except hot water, into a mug. Stir thoroughly, then top with hot water. Garnish with a cinnamon stick and serve warm.

Shake all ingredients hard on ice and pour into a rocks glass over ice until the egg has frothed. Top with a maraschino cherry as a garnish and serve.

Is Jack Daniels a bourbon whiskey?

Bourbon is a style of whiskey that originates in Kentucky and uses a specific ratio of certain grains in the mash along with a specific style of oak barrels for aging. Jack Daniel’s, on the other hand, is made in a purely Tennessee style.

Can you visit Jack Daniels distillery?

The Jack Daniel’s distillery is open for tours and tastings. Visit this link for more information on the different tours available.

Where can you buy the Jack Daniels BBQ sauce?

Which Jack Daniels is the strongest?

What size bottles are Jack Daniels whiskeys available in?