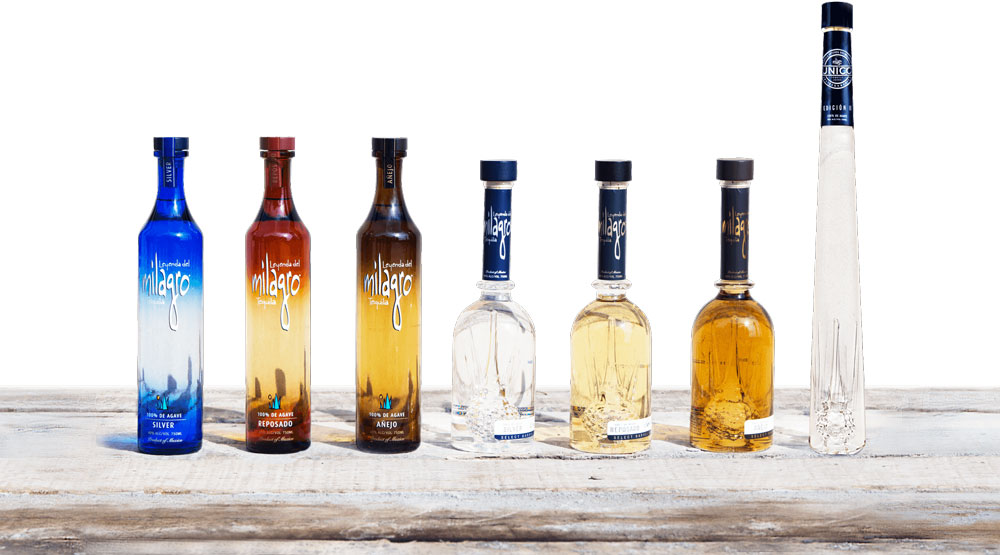 Milagro is a well-known Mexican tequila that has become a favorite of tequila-drinkers around the world. Milagro offers drinkers five different tequilas, each of which is triple distilled from 100% blue agave, bringing a crisp sweetness to every sip.

Founders Danny and Moy sought to create a tequila that connected the rich Mexican culture to the world of modern tequila. They were disappointed in the tequilas they saw throughout Mexico City in the late 1990s and knew they could create something better. After connecting with Pedro, a master distiller disillusioned with the world of multinational distillers, they started Milagro.

It quickly became popular throughout Mexico City and beyond, known for its clean taste and the sweetness of the blue agave from which it derives.Since its 1997 founding in Mexico, Milagro has become available worldwide.

You can find it in most liquor stores throughout North America, from your local mom-and-pop shop to the larger discount stores. You can also purchase Milagro online on the company’s official website or at other major liquor retailers.

Milagro tequila comes in several varieties with a wide price range, making them an excellent choice for nearly any budget.

With so many options to choose from, buying Milagro can present a challenge to the unfamiliar. We will break down the different options so that you can decide which will best fit your needs.

Milagro offers two variations of each type of tequila. While both are the same alcohol content (40%/80 proof), each variation is aged for different amounts of time and has slightly different flavors.

Milagro Silver is a bright, clear tequila described by Milagro as crisp with vegetal and citrus notes. It is the least expensive option that Milagro offers. It is un-aged.

Milagro Reposado is a slightly more expensive option than the Silver, aged 2-4 months and tasting somewhat like caramel. This tequila is a good option for mixed drinks, such as margaritas, due to the amount of time that it spends aging.

The Milagro Anejo is a pale amber tequila aged from 12-14 months. This smooth option brings a variety of flavors, notably caramel, coconut, and toasted oak. You will also taste hints of chocolate, tobacco, and even tropical fruit notes.

The Barrel Reserve Anejo is the most expensive of Milagro’s basic tequilas. It is aged 18-24 months, giving it a full-bodied taste that is more refined than its counterparts. It maintains the flavors of the Milagro Anejo, with an additional hint of vanilla.

The Milagro Romance is harder to find in stores but offers an unusual tequila experience. The bottle consists of an external and internal chamber, each with its own neck. The outer space contains Milagro Reposado, while the three inner sections contain the Select Barrel Reserve Anejo.

We recommend this unique choice if you are looking for an option that satisfies multiple tastes or for an interesting talking piece at your table.

The Milagro Unico II is Milagro’s high-end option, bringing tastes of caramel, vanilla, and black pepper. It is a Joven blend, meaning that it consists of their Milagro Silver blended with the Barrel Aged Reposado and Anejo reserves, resulting in a long warm finish to the drink. The Unico II is a good option for anyone looking for a less-common Joven tequila or something a little more expensive.

You can drink tequila in many ways, but which is best suited for Milagro? Milagro is a versatile tequila – You can drink it neat or in various cocktails to suit your tastes.

If you want to enjoy your Milagro tequila like the locals, drink it chilled and neat, without adding salt or lime. Tequila is stored in the refrigerator in most of Mexico, keeping it cooled to the perfect temperature. Skip the salt and lime so that you can enjoy the tastes of Milagro, whether that be the crisp citrus of the Silver or the caramel vanilla of the Unico II.

If a neat drink isn’t for you, enjoy your Milagro in one of these three cocktails listed on Milagro’s official website. We have a delicious cocktail for whichever Milagro you have on hand.

Muddle four chunks of pineapple and two basil leaves together in a shaker. Add two parts Milagro Reposado, ¾ parts agave nectar, and 1 part fresh lime juice. Shake it up and strain it into a glass with ice. Garnish with additional pineapple and basil. As with the Margarita, substitute Simple Syrup for agave nectar if you do not have any handy.

Add two parts Milagro Anejo, one part Italian Amaro, ½ part allspice dram, and 1-2 dashes of Aztec chocolate bitters to a mixing glass with ice. Mix until it is well-chilled. Strain the mixture into a martini glass with ice and garnish with a flamed orange peel.

Some Milagro, such as the Barrel Reserve Anejo and the Unica II, are considered top-shelf tequilas.

William Grant & Sons purchased Milagro tequila from original owners Danny Schneeweiss and Moy Guindi in 2006. You will now find Milagro throughout the United States and other parts of the world.

What Does Milagro Mean?

Milagro translates to “miracle” in English. The founders chose the name after first tasting the tequila and pronouncing it a miracle unto itself.

If you do not have Milagro on hand, we can offer you some alternative tequilas, listed in order from least to most expensive.