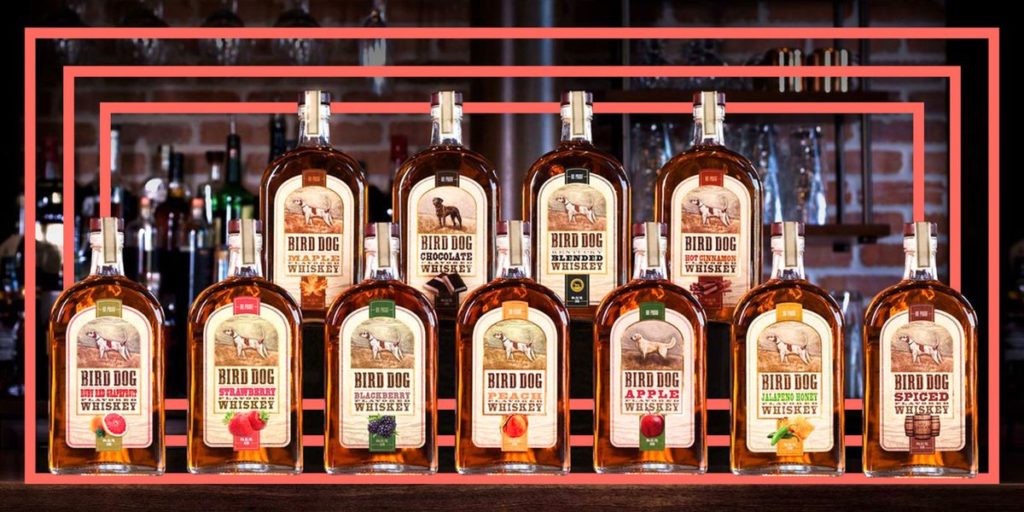 It is owned by the Western Spirits after they released a line of flavored whiskeys to selected markets only in 2009. After it gained warm reception from the consumers, it was branded as Bird Dog Whiskey which was launched the year after in 2010.

How is Bird Dog Whiskey Made?

The Bird Dog Whiskey has a simple, straightforward formula:

Just like the Bird Dog whiskey, most bourbons are made in Kentucky. Bourbon must be made in the U.S. and the to-ferment mash must contain at least 51% corn. That’s why compared to other whiskies, bourbons taste sweeter. Kentucky straight bourbons are aged in charred oak barrels for at least 2 years.

Bird Dog’s Kentucky bourbon tastes sweet and smoky, attributing to the corn composition and the charred oak barrels. Its distillery is with Bardstown Bourbon Company in Bardstown, Kentucky since 2017 when Western Spirits forged a partnership with them for the production of their whiskey brands.

The unique selling point of Bird Dog are their 15 flavored whiskies, currently speaking. They are the first company to release a blackberry-flavored whiskey in 2010. In 2013, they released the peach and hot cinnamon flavors, followed by the maple flavor in 2014. Today, there are 15 flavors, with salted caramel being the latest. In 2021, the salted caramel-flavored whiskey earned Double Gold in the San Francisco World Spirits Competition and Gold in SIP Awards.

Where to Buy Bird Dog Whiskey?

If you are frequent shoppers at grocery stores, depending on availability, you can chance upon stocks in supermarket chains like Walmart, Costco, Safeway, and Kroger, among others. Some large pharmacies like CVS and Walgreens also sell distilled spirits.

But you’ll likely be able to find Bird Dog Whiskey in liquor stores such as Total Wine and Bevmo, for example.

A complex set of whiskies made for shots and cocktails

How Good is Bird Dog Whiskey?

Bird Dog’s flagship line of products is its flavored whiskies. It appeals the most to people that are beginners to the whiskey game. The higher alcohol content of the flavored whiskies gives balance to the bourbon’s sweetness. So it’s neither harsh nor sweet. The flavors are made enticing for whiskey beginners. It’s a great prelude to trying out straight whiskeys.

The black cherry flavor was the first flavored whiskey released by Bird Dog. It also has the most number of awards among all of Bird Dog’s flavored whiskies. Though its taste is quite likened to a medicinal cough drop, it is balanced out by the caramel and vanilla notes with a smooth finish. Other recognized flavors are peanut butter and the latest salted caramel.

However, when it comes to straight bourbons, customers find better value in other brands. Much of the reasons lie with the company background and branding. In the whiskey industry, 10 years in the business places you as a rookie player. Plus, Western Spirit doesn’t have its own distillery — they only source out bourbon from partner Kentucky distillers.

Since Bird Dog’s flavored whiskies are already savory enough, you can drink it neat or with some ice. You can also garnish it with fresh fruits or herbs. For example, you can drink strawberry-flavored Bird Dog whiskey with fresh strawberries.

Or, depending on your taste, you can also mix different flavors of Bird Dog’s portfolio of flavored whiskies. For starters, they recommend mixing 1.5 oz. of peanut butter and 1 oz. of blackberry flavored Bird Dog whiskies.

Then again, you can easily mix it with cocktails because of its sweetness such as:

More cocktail recipes with Bird Dog Whiskey can be found in their website’s Mixology.

Are there Bird Dog gift sets?

Is Bird Dog whiskey a bourbon?

Yes. All bourbons are whiskey, but not all whiskies are bourbons. Bourbon falls under the whiskey category, particularly American whiskey.

Yes, Bird Dog whiskey products have a smooth finish because of the higher proof (at least 80).

Gluten comes from grains that are used to make whiskey. However, due to the distillation process, the gluten cannot be vaporized along with the spirit. It is removed in the process. So pure whiskies are gluten-free. However, flavored whiskies can contain gluten when flavoring from grains is added to the spirit.

There is no such specific label in Bird Dog Peach Whiskey. To be sure, it’s best to ask the distillery for this information.

Does Bird Dog whiskey have sugar?

Their flavored whiskies may contain sugar to enhance their fruity flavor.

If you’re looking for alternatives to the flavored whiskies of Bird Dog, here are similar-tasting ones: