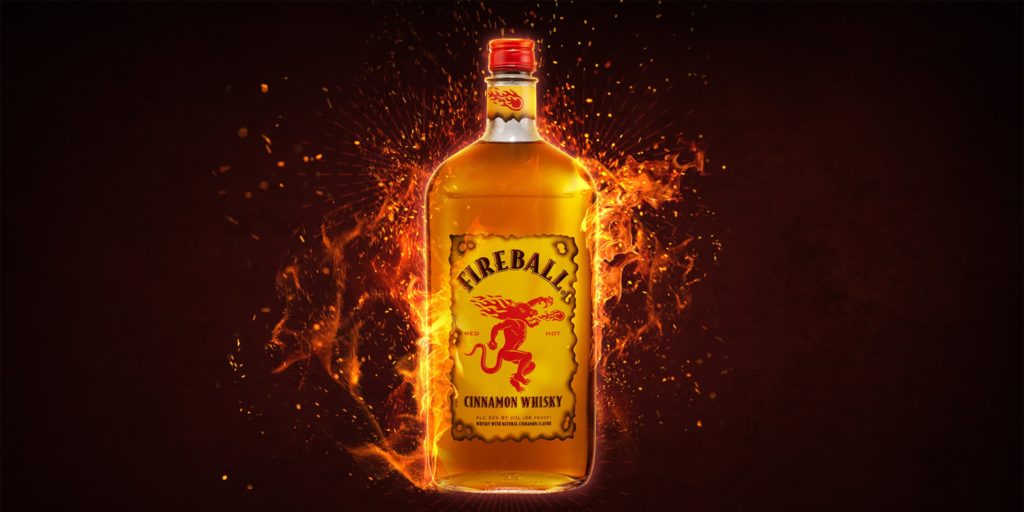 The catchphrase of Fireball Whisky —  “Tastes like Heaven, burns like Hell” — is an ode to its distinct sweet and spicy taste, like being on fire. In fact, others describe it like cinnamon gum on fire.

This liqueur is popular with college kids who enjoy taking shots at parties. It’s even featured in Pitbull’s song, “Fireball”, where some of the lyrics go — “We gon’ drink drinks and take shots until we fall out. Like the roof on fire.”

Although it’s branded as a whisky, it’s technically NOT a whisky.A whisky must have an alcohol content of at least 40% ABV. Fireball Whisky is just at 33% ABV which puts it in the category of flavored whiskies.

How is Fireball Whisky Made?

Fireball Whisky is more of a pre-mixed cocktail than a distilled spirit. Its base is Canadian whisky infused with natural cinnamon flavors and sweeteners. Whisky aficionados may not appreciate Fireball, but young hedonists love it.

As to how long it’s aged and what its exact ingredients are, this information is unknown. We just know that it uses whisky that’s mashed, distilled, and aged in Canada. Although most Canadian whiskies are fermented from rye, they can also use other grains like corn and malted barley.

There are no distillery tours for Fireball Whisky. However, Sazerac also owns distilleries like Buffalo Trace Distillery which is open to visitors.

Where to Buy Fireball Whisky?

Fireball Whisky is available all over the United States and Canada. You can buy them at Walmart, Walgreens, Target, Safeway, and Ralphs. Or at liquor stores like Total Wine. For other parts of the globe, they have international distributors. Alternatively, you can also order online through their retail partners like Drizly and ReserveBar.

Since Fireball is more popular as a party drink, the 66-proof Fireball is also sold in packages perfect for group consumption.

Fireball will also be releasing more products this year, like the Fireball Whisky 42 Proof, for instance. The product was made for the Ohio market which can only sell spirits with lower alcohol content. It can be bought at approximately 6,000 stores in Ohio.

Fireball’s flagship product is the 66-proof Fireball Whisky. Its price is very affordable which costs just $16.79 for a 750-mL bottle.

Fresh lemonade mixed with a little of the Fireball Whisky by just about 10% ABV.

Apple-favored juice mixed with a little of the Fireball Whisky by just about 10% ABV.

A pack of 6 50-mL or 100-mL bottles of Fireball Whisky in cardboard carrier packaging. This is perfect for a small group of drinkers, like drinking with your closest circle of friends.

The ultimate party pack that consists of 30 25-mL shots of Fireball Whisky. You can start the party shots no matter where you are.

A bucket filled with 20 pieces of 50-mL bottles of Fireball Whisky. There is even more room for ice to keep your drinks cool long enough for the party to last.

The most common distinction of Fireball Whisky is its very sweet taste, overpowering cinnamon smell, capped with a strong and spicy whisky finish. If you’ve tasted the Atomic Fireball candy, that’s how Fireball Whisky tastes like but with a fiery kick of red hot cinnamon. The upside if you drank too much would be a fresh cinnamon breath.

However, there are also not-so-enthusiastic reviews from whisky aficionados. But this is quite expected already since Fireball Whisky is technically not a whisky — it just contains whisky. The alcohol content is not that strong, but the spicy cinnamon flavor gives it the fireball-burning sensation.

Is Fireball Whisky Illegal in Europe?

No, it’s not. In 2014, Fireball agreed to recall its products from the mentioned European countries, but its American stocks weren’t affected.

As of today, all versions of Fireball Whisky (regardless of location) is propylene glycol-free. And it certainly doesn’t contain antifreeze which makes it 100% safe to drink — in moderation, of course.

Although Fireball Whisky is very popular especially with millennials in the drinking age, it wasn’t always the case. Fireball started its roots in the 1980s with a Canadian company called Seagram. It was only available back then in Canada as “Dr. McGillicuddy’s Fireball Whisky”. When its popularity didn’t sustain for long, Seagram sold the brand over to an American-owned company called Sazerac Company.

With renewed branding as “Fireball Cinnamon Whisky” in 2007, it gained popularity after Sazerac’s creative marketing ploys. They started offering free shots at bars and posting Fireball drinking contests on social media sites like Twitter and Facebook. As a result, its sales boosted and even outranked Jameson Blended Irish whisky. Sazerac also owns a few other brands of spirits like Pappy Van Winkle, Buffalo Trace, and Southern Comfort, among others.

Fireball Whisky is famously taken as party shots in bars. So definitely, the best way to drink it is through ice-cold shots.

But still, there’s no stopping you from mixing it with other drinks to make cocktails such as:

A shot of Fireball Whisky mixed with grenadine, apple cider, and ginger ale. Serve in a cocktail glass garnished with a maraschino cherry.

A holiday cocktail made with Fireball Cinnamon Whisky mixed with raw sugar, eggnog, and amaretto liqueur. Garnish with cinnamon stick, freshly grated nutmeg, and rim the glass with ground cinnamon.

More cocktail recipes with Fireball Whisky can be found in their website’s Recipe.

Is Fireball a whisky or tequila?

Fireball is a flavored whisky — particularly, cinnamon-flavored Canadian whisky. The whisky is spelled without an ‘e’ because that’s how they use it in Northern America.

How long does Fireball whisky last?

Whiskies take a long time to expire especially when stored properly. But in the case of Fireball, it is flavored whisky with much lower alcohol content. Compared to distilled spirits, it expires earlier.

There’s no need to store an opened bottle of Fireball Whisky in the refrigerator. It can last up to 1 year, but it’s still best to look at the expiry date on the bottle.

Where to buy Fireball Whisky keg?

Fireball Whisky Keg, also called FireKeg, contains 5 liters or approximately 115 shots of Fireball Whisky. Currently, FireKeg is not available through Drizly and Reserve Bar. But other online shops have available stocks — like FineCask.com. It is also available in U.S. retail stores at around $74.99.

How many carbs and sugar are in Fireball whisky?

According to the fitness app MyFitnessPal, a shot (1.5 oz.) of Fireball Cinnamon Whisky contains 38 g of carbs, 11 g of which is from sugars.

How many calories are in a shot of Fireball whisky?

Still from the same source as above, a 1.5 oz. shot of Fireball Cinnamon Whisky is approximately 108 calories.

Is Fireball Whisky good for a cold?

Whisky and cinnamon can both be effective decongestants. But if your goal is to alleviate symptoms of colds, there are better alternatives than Fireball Whisky. It’s best to drink fluids, especially cinnamon-infused hot beverages.

Is Fireball Whisky Bad For You?

In 2014, Fireball Whisky faced controversy when Norway, Finland, and Sweden asked for a recall on their products because of the high propylene glycol content — a compound that’s used in antifreeze. But it turns out that the stocks that were meant to be shipped to Northern America ended up in Europe where food standards are more stringent compared to the U.S.

In Fireball Whisky, propylene glycol helps enhance the cinnamon flavor so the whisky doesn’t overpower it. Propylene glycol is commonly found in food so the FDA deems it safe to consume. The same applies to CDC but at slightly lower levels of consumption.

Fireball Whisky makes a pretty big name for itself in the flavored whisky category. But if you’re looking for other flavored whiskies with higher alcohol content, the list below can also be great alternatives: