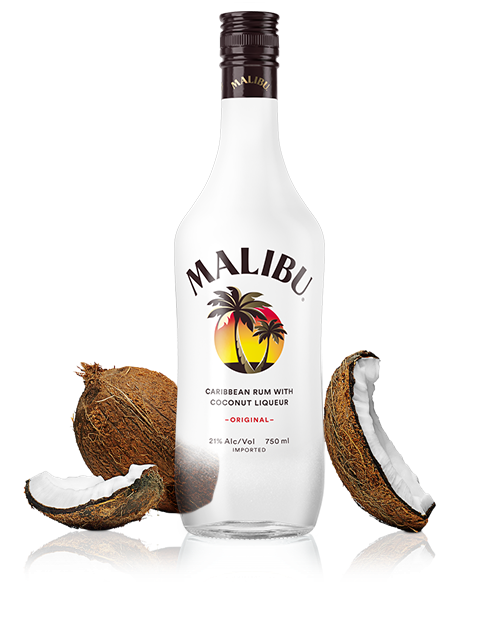 Malibu rum is known for its laid back marketing and flavor of the Caribbean. Originally a single Caribbean rum flavored liqueur, Malibu has branched out to include a whole line of flavored rums and pre-made cocktails so that folks who love the signature flavor of Malibu can enjoy its many forms.

Created in 1982 as a way for bartenders to simplify the Pina Colada, Malibu Rum has since become a staple in every beach bar, night club, and restaurant. The idea for Malibu’s original flavored rum was conceived by Tom Jago in Curaçao. A fruit-based liqueur with rum, coconut flavors, and added sugar, it was marketed as a flavored rum due to its low alcohol content (most Malibu flavored rums fall around 21% ABV rather than the typical 40% ABV found in most rums).

Once the product became a hit, Jago moved production to Barbados and increased the quality of his product before selling the brand Malibu for $800 million. Malibu was later sold again to Pernod Ricard who produces and distributes the products today.

For ease of access, Malibu began offering ready-to-drink canned cocktails in winter of 2020 to satisfy the Malibu craving of fans who aren’t in the mood to mix a whole cocktail. Different flavors are available in both sparkling and still cans, and frozen pouches can be bought to serve a crowd.

Where to Buy Malibu Products

Malibu rum can be found in most liquor stores worldwide as well as bars and restaurants. It can also be delivered to any address using the website Drizzly, a platform much like Uber Eats and GrubHub for alcohol purchases.

Most of Malibu’s ready-to-drink canned cocktails and pouches are found in grocery stores like Kroger, Walmart, and Costco. Additionally, in states and countries that allow the sale of liquor at grocery stores Malibu rums can be found at convenience stores and the previously mentioned grocery stores.

Choosing the right Malibu product is a process that requires understanding your recipe if you have a cocktail in mind, your own palate, and your Malibu options. Let’s explore more in depth what Malibu has to offer and how to choose the best product for you.

Since Malibu offers several flavored rums, there’s one for everybody, even people who aren’t a fan of the original coconut flavor. Many cocktails call for Malibu Original Flavored Rum, but strawberry, pineapple, mango, and several others usually make a good substitute in a recipe. Malibu also has several recipes for their other flavored rums listed on their website to satisfy cravings for Malibu in various cocktails.

In addition to the standard flavored rums Malibu offers, they have two high proof flavored options available. These rums are 35% ABV rather than the usual 21% ABV found in Malibu’s rums, only 5% ABV shy of usual straight rums. Malibu Red mixes tequila with the original flavors of Malibu Original, and Malibu Black uses a darker rum with a higher proof mixed with Malibu’s original flavors.

Malibu Splash, a sparkling malt beverage in a range of tropical flavors, incorporates Malibu’s signature flavors into the highly popular trend of canned hard seltzers. These 12-oz cans can be purchased in a variety pack or single flavor packs for easy, low calorie drinking.

Malibu Cocktails in a Can

Besides canned cocktails, Malibu offers punch pouches that can be frozen or refrigerated to serve a crowd. When frozen they produce a blended cocktail and when refrigerated they can be poured over ice. Rum Punch, Blue Hawaiian Punch, and other rotating seasonal flavors are available.

The Best Way(s) to Drink Malibu

Malibu can be enjoyed in a variety of ways, including in mixed drinks and mixed with single mixers. It’s best to choose cocktails that highlight the flavors of the rum rather than compete against it, so here are some of the best choices of cocktails and mixers to enjoy Malibu Rums.

Stir all ingredients and pour over ice for an iced Pina Colada.

Fill glass with ice, then pour in this order for a beautiful layered cocktail: Malibu Original, cranberry juice, pineapple juice.

Muddle a generous amount of mint leaves (about 10 for one glass) in lime juice. Then fill with ice, pour liquid ingredients, stir, and enjoy!

Mix all ingredients over ice into salt-rimmed glass.

5 Best Things to Mix with Malibu

There are a lot of reasons to opt for a simple mixer rather than a full-blown cocktail. Some people prefer the simplicity and ease of mixing two ingredients (liquor and mixer), and still others appreciate highlighting the liquor or liqueur itself with a simple mixer. Here are the five most popular mixers with Malibu:

Is Malibu Rum the same as coconut rum?

Can you drink Malibu rum straight?

Malibu, as a liqueur, is as delicious straight as it is mixed. Because it’s sweet and incorporates other flavors, it makes a great shooter or sipped liqueur.

In states where it’s legal to sell liquor in grocery stores Malibu can often be found in Costco, though not reliably so.

How much sugar is in Malibu Rum?

There are 13.4 grams of sugar per ounce of Malibu Original Flavored Rum.

Since Malibu is based on the more affordable side of the alcohol scale, it is not considered top shelf and is in the low-to-mid-tier range.

Since it has a lot of added flavors and sugars, Malibu rums aren’t recommended to keep on the shelf longer than two years.

Usually available at any bar or liquor store that doesn’t carry Malibu.

Similar flavors to Malibu’s flavored rums are available, and sweeter than Malibu.

This is a different flavor that Malibu doesn’t offer.