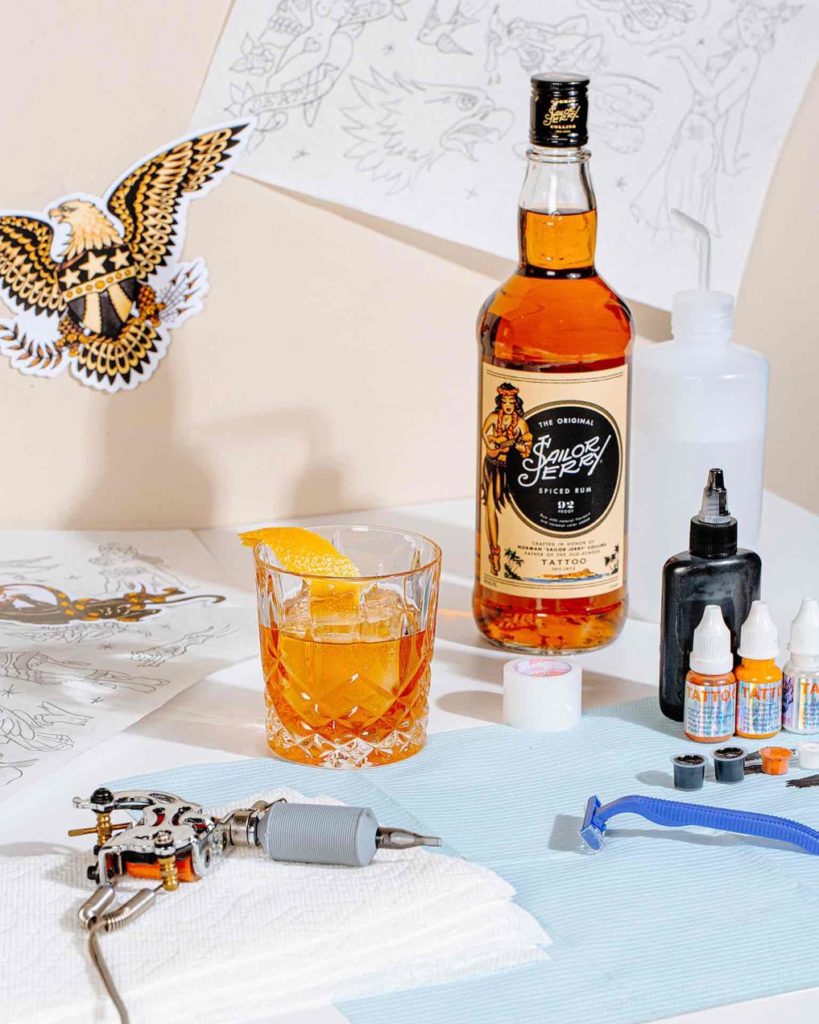 Sailor Jerry, born Norman Keith Collins in 1911, is a household name for his tattoos and art, all of which are bold, precise, and authentic. So it’s no surprise that this namesake rum is imbued with the same qualities.

Sailor Jerry rum is made with the same attention to authenticity that Sailor Jerry himself was known for in his art. Using his iconic hula-girl american traditional artwork as the label, the rum harkens back to his days sailing from the west coast to Hawaii. Before his time in Hawaii, though, Sailor Jerry was born in Reno and raised in Northern California. In his late teens he developed a passion for the artform that is tattooing and began an internship with a tattooer named “Big Mike” from Alaska.

The makers of the rum studied rum styles around the world, the history of the drink, and how sailors across the seas historically made the beverage palatable. Using this information, Sailor Jerry became a “navy strength” rum with a high alcohol content and a smooth flavor, imitating the spices sailors would use to enhance the flavor of their daily rum rations.

The brand, Sailor Jerry, produces its rum using a blend of Caribbean rums with added spices and caramel and vanilla flavors, producing a historically accurate high proof recipe. Before governments banned rum rations for their sailors, captains would ignite a sample of the rum with the sailors as witnesses to provide “proof” the rum wasn’t watered down, hence the word “proof” being used to this day as a measurement for alcohol content. Sailor Jerry comes in at a whopping 92 proof, or 46% alcohol by volume.

Sailor Jerry Rum isn’t one of the big-box alcohol brands found in every grocery and liquor store, but it’s not impossible to find and you might stumble upon it in your local liquor supplier. There are several online suppliers who consistently stock the rum like WineChateau.com and TheBottleHaus.com. It can also periodically be found at Costco when they’re lucky enough to get their hands on it, and larger liquor stores carry Sailor Jerry rum consistently. You can head over to Sailor Jerry Rum’s website to see if your local store carries Sailor Jerry.

Sailor Jerry produces two rums: its Spiced Navy Rum and its limited edition Savage Apple Rum, both of which are currently available at Sailor Jerry retailers.

This is the Sailor Jerry rum you want to purchase if your palate prefers strong, bold, and smooth. This high proof rum will burn on the way down but the added spices, vanilla, and caramel make it smooth at the same time. It’s perfect for mixing into Mai Tais, Mojitos, and Long Islands thanks to its high alcohol content, so buy this if you’re a fan of high alcohol and a buttery smooth balance.

Sailor Jerry Savage Apple Rum uses the original Sailor Jerry recipe with added flavors of sour apple. It’s like a caramel apple with cinnamon and spice and everything nice, perfect for shooting or making simple apple rum recipes. Perfect for early fall, this rum is as seasonal as it comes. Buy this if you have a specific apple rum recipe in mind or if you like to shake up ice cold apple rum shots.

Sailor Jerry is designed to drink straight, but the fact that it’s high-proof yet smooth makes it the perfect mixing rum. Here are some recipes perfect for this rum.

Shake all ingredients hard until frothy and cold. Pour over ice in a highball glass and garnish with pineapple and a cherry.

Shake simple syrup, rum, and lemon juice until icy cold. Strain into coupe and fill with champagne or white bubbly. Garnish with a lemon twist.

Rim rocks glass with crushed cinnamon candy hearts and fill with ice. Shake rum and grenadine hard with ice and strain over ice in rocks glass. Top with ginger beer and serve with a cherry garnish.

For a simpler drink, Sailor Jerry can be mixed with single mixers for an on-the-go cocktail.

What is the tattoo on Sailor Jerry rum?

Norman “Sailor Jerry” Collins was and is best known for his contributions to traditional American tattooing, and the Hawaiian girl on the Sailor Jerry rum labeling is one of Sailor Jerry’s most well-known tattoo designs.

Sailor Jerry rum is spiced but not dark. It has a high alcohol content, but doesn’t have that syrupy flavor of a dark rum.

Sailor Jerry rum can be found occasionally at Costco, but don’t count on it.

How long has Sailor Jerry rum been in production?

Sailor Jerry rums have been in production for almost 20 years.

Sailor Jerry rum isn’t aged, but spiced instead. This is because in order to be historically accurate the brand opted to make something unaged, as sailors rarely bothered to take the time to age in casks.

How strong is Sailor Jerry rum?