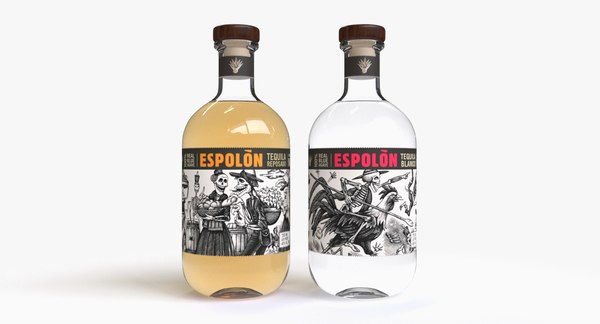 Cirilo Oropeza spent decades studying and distilling tequila to become a Master Distiller. In 1995, he met his business partner, and together they founded Destiladora San Nicolas in the Highlands of Jalisco, Mexico. This location, the story goes, gave Cirilo everything he needed to make the best tequila he could have dreamed of, which he named Espolon.

The name Espolon comes from the Spanish word for the spur of a rooster’s foot, and Espolon’s mascot, Ramon the rooster, symbolizes national pride and strength. Today, Espolon continues to honor its Mexican heritage through its signature artwork. Each bottle of Espolon Tequila features the artwork of Jose Guadalupe Posada, a Mexican artist, rebel, and hero.

Espolon Tequila is made from 100% Blue Weber Agave, hand-harvested by Espolon’s farmers when the plant’s sugar content is at its peak. The pinas are checked for quality, chopped, and smashed to make it easier to extract the delicious agave flavor.

The agave pinas are then distilled with natural water from a well in the Highlands of Jalisco at Casa San Nicolas, over 2000 m. above sea level. Using stainless steel autoclaves, Espolon distills its tequila using pressurized steam to get just the right level of caramelization and delicious agave flavor.

Today, Casa San Nicolas (NOM: 1440) employs a process perfected since 1889 and studied by Maestro Tequilero Cirilo for decades. The result is a genuinely authentic tequila that celebrates the history and heritage of its homeland.

Espolon Tequila can be found at most major liquor stores and is also available online via Drizly.

There’s an Espolon tequila for every circumstance, whether you’re looking to spike a cocktail or sip it neat. Here’s how to decide which variety is right for your next drink.

Espolon Blanco is the tequila for all your favorite cocktails, blended or on the rocks. Grab a bottle of Espolon Blanco if you’re making Palomas or if you’re looking for a more refined shooter.

This spicy Reposado is perfect for cocktails that demand a little more nuance than the Blanco can provide. If the tequila is the headliner of your cocktail, reach for Espolon Reposado. The aged flavor of this tequila can take your margarita to the next level.

This Anejo begins as a Blanco, aged 10 months in American oak, and finished in charred bourbon barrels for the last two months. Espolon Anejo features notes of caramel, vanilla, dried fruit, and chocolate.

To get a true sense of Espolon Tequila’s authentic agave flavor, you should really consider sipping it neat, particularly if you can get your hands on the Espolon Anejo or Anejo X. But if you’re craving a cocktail, these four bring out the best of Espolon.

This cocktail, believed to be named after a famous Mexican folk song, offers a powerful combination of sweet, salty, and bitter flavors.

Combine tequila and lime juice in a highball glass on the rocks. Top with grapefruit soda and sprinkle with sea salt for a refreshing summer cocktail.

In a copper cocktail cup, combine tequila and lime juice over ice. Top with ginger beer and serve with a lime wedge.

Espolon Anejo offers a bourbon-like finish that makes it a great way to bring new life to the Old Fashioned.

Over ice (one large cube, if you’ve got it), combine tequila, Agave nectar, and bitters. Serve with an orange peel garnish.

Espolon Blanco tequila brings a more authentic Agave flavor to your traditional margarita on the rocks.

Combine tequila, triple sec, and juice from one whole lime in a cocktail shaker with lots of ice. Shake vigorously, and pour into a high ball or footed glass with a salted rim, if you like. Garnish with a lime wedge.

Want to try your hand at making your own cocktail with Espolon tequila? Here are a few mixers that do it justice.

Now that you know how best to enjoy Espolon tequila, here are some last burning questions you may have.

Espolon tequila is considered a budget tequila, but most tequila lovers agree that it tastes like top shelf. All that means is you don’t have to spend as much money to enjoy a truly authentic tequila.

How do you pronounce Espolon?

Espolon, from the spanish word for a rooster’s spur, is pronounced exactly the same as its namesake. Es-poh-lohn.

Who created Espolon tequila? And who is it owned by?

Is Espolon a sipping tequila?

Espolon Tequila is widely available at most major liquor stores. Not all stores carry all varieties, however. If you need to choose a different tequila in a pinch, or if you want to try something new, here are a few tequilas you may like.