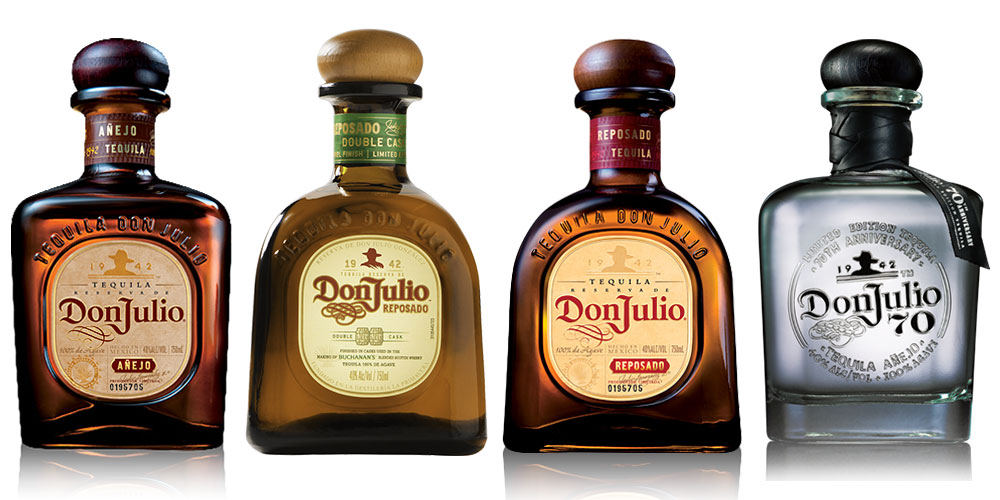 Don Julio Tequila exists in large part because of one man, Don Julio González-Frausto Estrada. Born in 1925 in the highlands of Jalisco, Mexico, Don Julio began working at the age of 15. His father had just died, leaving behind his mother, himself, and his six siblings. He found that typical jobs didn’t earn him as much as he wanted, so Don Julio settled on the idea of selling tequila by horse, making far more than he could at other jobs in Jalisco.

Don Julio learned to make tequila from his uncle, and eventually, his need turned to passion. In 1942 Don Julio opened a distillery with the aid of a wealthy merchant’s loan of 20,000 pesos. Many describe Don Julio González as a man who revolutionized the tequila industry by opening a unique distillery and setting industry standards for agave harvest and production.

Don Julio Tequila makes all of its products from blue agave plants that are grown far enough apart to allow for maximum plant growth. The current standard that Don Julio established is allowing the plant to fully mature, which may take over five years.

Said to be the purest form of tequila, Don Julio Blanco Tequila is the base used in all of their variants. Known as “Silver” tequila, it has a crisp agave flavor with notes of citrus. It is pure and unaged, leaving a light, sweet, agave finish.

The golden amber color of the Don Julio Reposado Tequila comes from being aged for eight months in American white-oak barrels. It claims a mellow, elegant flavor with an inviting aroma, perfect for on the rocks.

Introduced as the “world’s first Añejo Claro Tequila,” Don Julio 70 is a celebration of the man himself, Don Julio. The smooth Blanco approach and complex Añejo flavors make a truly unique experience that aged for eighteen months.

Made in small batch production and aged for at least two and half years, Don Julio 1942 recognizes the year that Don Julio began his journey into tequila. A rich nose and warm oak taste lead the way to a lingering oak and rich vanilla finish.

The favorite of the Don Julio brand, Don Julio Real Tequila, is a rare Extra-Añejo and is proud to claim it was the first. It is said to smell strongly like cooked agave and that the taste is of caramel, chocolate, almond, and vanilla undertones, with a sweetly seductive finish at the end.

This double casked Don Julio Reposado has notes of tropical fruits and vanilla peaty tones, honeyed agave flavors, and a spicey and peaty finish. The barrels used in the process are scotch whisky barrels.

Orange wine casks infuse the flavors of macerated orange peels, citrus, and honey. It balances notes of honeyed agave and spice. Don Julio Primavera is great with an orange wheel.

Aged ten months in a single cask, Don Julio Reposado Private Cask has a nose of caramel and tangerine, a taste of oak, and a smooth but spicy finish.

Complicated drinks are not required to enjoy a mixed tequila beverage. Tequila can pair well with a variety of juices, sodas, and sparkling drinks.

Some Costco stores carry Don Julio 70 Añejo, but this line is only available in the US and Mexico.

Don Julio 1942 is still in production; however, they discontinued a bottle and box set, and you may find a new design on the shelves.

Don Julio 70 Añejo is available for purchase in the United States.

Don Julio 1942 is not known for being less expensive in Mexico than in the United States.

Don Julio is the original Luxury brand of tequila and is considered top shelf by many tequila aficionados.

What Don Julio Tequila is the most expensive?

The most expensive Don Julio tequila is Don Julio Real Tequila, due to the tequila aging in American White-Oak Barrels for three to five years.

Which Don Julio is the smoothest?

The Don Julio Real Extra Añejo Tequila is the smoothest to drink due to the length of time it aged in barrels (3-5 years).

Which Don Julio is best for shots?

The best Don Julio to use for shots is the one you enjoy the most that still meets your price point as the proof is generally consistent across the brand.

There are, of course, alternative tequilas to the Don Julio luxury line of tequila that may be more within your price range. It is essential to understand that price does not always determine what your pallet or taste buds will enjoy, so remember to find the flavor for your preferences.

Based on information available online, here are some tequila competitors, ranked in order of cheapest to the most expensive for a 750 ml bottle (prices may vary):