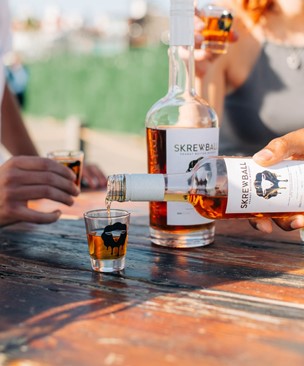 Bourbon whiskey was the first liquor invented in America, and it has become a symbol of American ingenuity, resilience, and community. The popularity of the whiskey has spread around the world, and since America is a melting pot of different backgrounds, an unconventional twist on traditional whiskey was bound to come along.

Skrewball is essentially an American whiskey mixed with peanuts and natural flavors. This not-quite-a-straight-whiskey, not-quite-a-whiskey-liqueur spirit bends the boundary between whiskey and liqueur, creating a new category of its own.

It was important to founders Steven and Brittany Yeng that they capture the essence of the insanely popular peanut butter whiskey cocktail invented in their restaurant, OB Noodle House, and bottle it for distribution.

They began by transitioning the cocktail into a shot and testing it on customers. If it was a success in shot form, they knew it would be a hit in the bottle. When their patrons raved about the shot, the couple committed to finding a way to blend quality whiskey and quality flavors to create something new, special, and enjoyable to share with the world.

Using her background in chemistry and his palate for a successful recipe, the couple created a peanut butter whiskey that shot well, sipped well, and blended even better.

Since its inception in 2018, Skrewball had rapidly outpaced others in the flavored whiskey category and has spread rapidly throughout the United States and Canada, promoted by influencers, individual liquor stores, and restaurants everywhere.

If you’d like a piece of the peanut butter whiskey pie, look in the flavored whiskey section of your local market (where market sales are legal) or liquor store. You can also order it for same day delivery from a local liquor store using Drizly.com, or you can order online for shipment from WineChateau.com.

Is Skrewball Right for You?

So how do you know if Skrewball is right for you? Consider this: are you interested in new and unexpected flavor combinations, or looking for a talking piece at a cocktail party? If so, this one’s for you. It shoots great chilled, sips wonderfully on ice, and mixes flawlessly with other liquids, so it’ll suit anyone you plan on serving.

The hallmark of a truly excellent table liquor is versatility. You want it to mix well with other ingredients for endless options for every palate. Here are some of the best ways to mix Skrewball Peanut Butter Whiskey.

The Old Fashioned is the original whiskey cocktail. Spice it up with a twist of peanut butter.

Stir all ingredients in a mixing glass. Pour into a rocks glass with one large ice cube. Garnish with a cherry and orange twist.

Shake and strain over fresh ice, top with soda and garnish with pop rocks and a festive skewer.

This cocktail combines all the classic flavors: lemon, lime, and wine, and adds a twist of the Skrew.

Shake vigorously and pour up or on the rocks. Float red wine.

The White Russian is a classic cocktail. But for a modern pivot on an old favorite, mix coffee liqueur and Skrewball into the recipe.

Build in a glass over ice. Pour whiskey followed by coffee liqueur, then float half and half on top.

5 Best Things to Mix with Skrewball

Skrewball is low maintenance. It’s already mixed with natural flavors to help you build an easy cocktail with a single added mixer. Let’s explore the 5 best.

Is there real peanut butter in Skrewball?

Skrewball uses real peanuts to flavor their whiskey. If you have an allergy, you’ll want to steer clear.

Does Skrewball have added sugar?

There is added sugar in Skrewball. It’s what makes it thick, lingering, and easy to mix in a cocktail.

Is Skrewball sold at Costco?

Skrewball isn’t always, but is often found at Costco. If you find it, scoop it up because it might not last long.

Is Skrewball a real whiskey?

Skrewball is made with real whiskey, mixed with natural, high quality flavors.