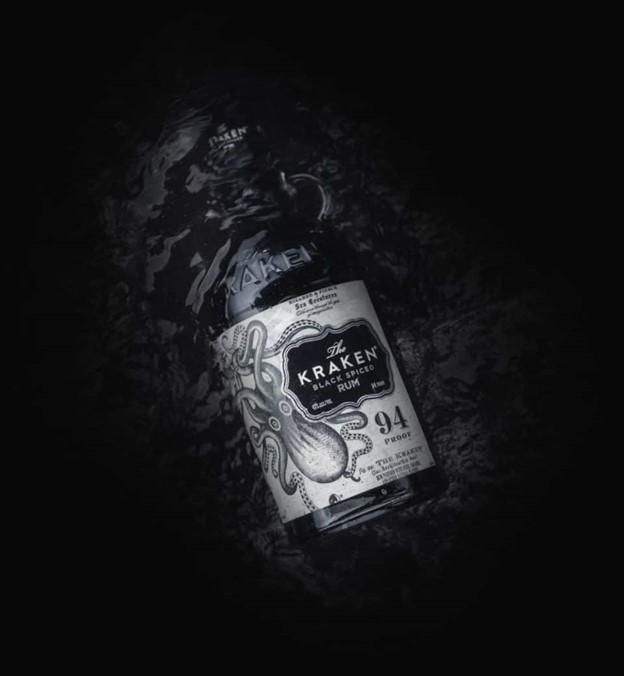 The Kraken rum, produced and distributed by Proximo spirits in Trinidad, is the world’s first black spiced rum. With notes of cinnamon, cedar, and clove it’s a year-round, easy drinking rum that can be dressed up in a fancy cocktail or dressed down on the rocks. With the theme of The Kraken running through all of The Kraken rum’s marketing and bottling, drinkers are swept away into a fantastical tale.

Introduced in 2010, The Kraken rums were the first ever black rums released to the public. Initially appearing as a black hue, hints of brown can be detected when held up to the light which harkens to the squid-themed marketing and labeling found on all the rums the brand produces. The brand has crafted an elaborate tale: The first ever bottle of The Kraken was discovered as the only remain of a ship that was swallowed whole by the squid beast of the same name.

The rum is black because it contains ink from The Kraken itself, so beware! The Kraken has spread his massive tentacles inland through each bottle of The Kraken rum, wreaking havoc on the souls of the damned inland. No one can anticipate when The Kraken will strike, but those who experience its fury will have epic tales to tell.

The Kraken rums are known for being dark, heavy, and spiced. There are eleven spices in the rum, but cinnamon, ginger, and clove are the highlights warming the chest on the way down, making the drink suitable for all seasons, not just the typical sunny rum weather. In addition to the spices, the rum is distilled from pure cane sugar molasses grown and processed in Trinidad where the rum is made, and caramel color is added for dramatic effect. The warm flavor is due in part to the one to two year barrel aged process each bottle undergoes.

The Kraken Rum is sold everywhere you find liquor, including ABC stores and liquor stores. In states that allow the sale of liquor in grocery and convenience stores The Kraken can be found at most of those locations as well, including but not limited to: Walmart, Kroger, Publix, and Costco.

The Kraken rums are the only of the like in the world. All their rums are strong, heavy, dark, and spiced. They mix well into cocktails that highlight their spices, and for those who appreciate the simplicity of liquor itself these all make delightful sippers. Here is a breakdown of each of the rums and what you can expect as you enjoy drinking them.

This is the original The Kraken rum, and it’s the recipe the rest of their editions are based on. With this rum, you can expect a strong rum flavor highlighted by notes of ginger, cinnamon, clove, and cedar. Choose this if you’re interested in the brand but want to try it unadulterated by their novelty flavors before branching out into the limited editions and variations.

The Kraken’s Dark Label rum is created with shots in mind. The distillery enhanced the spiced notes of cinnamon and cedar and added vanilla, peppercorn, and toffee to make it smoother and ideal for drinking on its own. It still blends well, though, in creamy cocktails.

This is a limited edition addition to the distillery, focusing on the smooth taste of coffee with flavors of spice and a smooth rich finish. If you’re a coffee fan this special edition will taste great on its own, chilled over ice, or in a coffee flavored cocktail. A coffee rum manhattan, anyone?

The Best Way(s) to Drink The Kraken

Since The Kraken is known for its heavy color and spiced flavor, it’s not for the faint of heart and many prefer it mixed into a cocktail or mixer. While it’s delicious sipped on the rocks, not everyone is looking for that strong experience. Here are some of the best other ways to drink The Kraken rums.

Boil root beer, remove from heat, and mix in Jello. Once Jello has completely dissolved, pour in The Kraken original spiced rum. Pour into shot cups, chill for two hours, and enjoy.

Combine all ingredients (except rum) and shake hard with ice. Pour over crushed ice and top with rum for a layered drink.

Muddle blackberries in lemon juice. Fill glass with ice and pour other ingredients. Stir and garnish with blackberries.

5 Best Things to Mix with The Kraken

The Kraken’s notable inherent flavors make for a complex cocktail even with a single mixer. Here are the five best one-ingredient mixers to pour with your bottle of The Kraken.

Can you buy The Kraken rum at Costco?

Is The Kraken sold in Canada?

The Kraken proudly sells its rums in Canada, though it’s not as easy to find in stores as it is in the United States.

When you buy a bottle of The Kraken online there is an option to purchase it with a signature custom pouch, canvas or leather. The Kraken also regularly releases limited edition sets that come boxed with a special edition drinking glass.

Can you drink The Kraken straight?

Because it’s spiced and smooth, The Kraken is an ideal straight drinking rum for rum lovers. The Dark Label is also designed with shots in mind.

Does The Kraken make other types of rums besides dark spiced?

The Kraken, to date, has only released dark spiced rums. This is their specialty and a signature of the brand.

Does The Kraken Rum have squid ink in it?

While the tale of The Kraken rum states that the first bottle was found as the lone remain of a ship eaten by the Kraken, The Kraken rums bottled today do not have squid ink in them.

Is The Kraken Rum a sipping rum?

The Kraken has notes of warm spices, and their limited editions have enhanced flavors making it perfect for sipping neat or straight up on ice.

Rum Alternatives to The Kraken